It seemed appropriate this year to feature a theme that kept me close to home, so I give you my A to Z within the small acreage that is Rhode Island. I tried to be creative (you’ll see!) but I hope you learn something about Little Rhody, too. Whether you’ve lived here all your life, grew up within the boundaries, or have never set foot on one of our many beaches, come along for a virtual tour.

There’s a Hope Valley in Rhode Island, too – a village in the town of Hopkinton. And Hope Artiste Village, a mill restoration project in Pawtucket. But today’s feature is the village of Hope, a mill settlement in Scituate. Set along the Pawtuxet River, Hope was alive with industrial activity from the mid-1700s, although these days it’s a quiet little community of residential dwellings.

The cannon pictured above sits in front of the lovely Hope Library on North Road. If you can’t read the engraving, it says: “This cannon was forged in the Hope Furnace Foundry, not far from this site, during our war for independence. On May 4, 1776, Rhode Island declared her independence from Great Britain, two months before the other twelve colonies. It is therefore appropriate that we here today, May 4, 1974, 198 years later, re-dedicate the cannon to the causes of independence and freedom, for which it was originally forged.”

The reference to the Hope Furnace Foundry was an iron furnace, constructed in 1766, after iron ore was discovered nearby the previous year. The factory produced household goods and crude iron, and did receive a contract from the Rhode Island General Assembly to manufacture cannons for use in the American Revolutionary War.

In 1806, the Hope Cotton Factory Company built the textile mill pictured above along the Pawtuxet River. The mill was constructed out of wood, and, in 1844, the buildings burned down and were replaced by a large, four-story stone building. An additional building was added in 1900, and a fifth floor was added to the original stone mill.

The Hope Mill produced textiles until 2007. The last textile manufacturing occupant of the mill was Just-A-Stretch, a weaver of elastic fabrics.

The mill gradually descended into disrepair, and ceilings collapsed after years of vacancy and neglect. In June 2020, a sale of the 38-acre property was finalized. The Hope Mill was sold to Paramount Development, which plans to turn the buildings into a residential compound. The idea was not well received by the residents of Hope, but the Planning Commission approved Paramount’s plan under the low-to-moderate-income housing plan.

The district of Hope was listed on the National Register of Historic Places in August 1995.

I’m standing at the corner of Seven Mile Road and Scituate Avenue, in what is called the village of Hope, Rhode Island. Well, I’m not standing in the middle of the road, because, although it’s not Route 95, sometimes the cars do fly past. When I face one way, I see this:

This is the brand-new St. Mary and St. Mena Coptic Orthodox Church of Rhode Island. It’s big and it has a gold dome that gleams in the sun and is visible from a distance.

When I turn and face the other way, I see this:

And this is part of Cloverdale Farm. There are cows grazing in the fields outside the frame of this photograph. There’s a little article about Cloverdale, and its cows, here. It’s a good story, and worth your time. Cloverdale is old, but hanging on. It’s what Scituate, Hope, and western Cranston were all about for a long time. And now Cloverdale has a new neighbor: a bright white church with a shiny gold dome, in a state that was founded on the premise of religious tolerance.

Do you feel as though 2012 kicked you to the curb, sucker-punched you in the jaw, sent you sprawling?

We are a weary world, and we need a reason to rejoice. Well, here it is.

You are not alone. You have reason to hope, and hope pushes away despair and grief. We can mourn and rejoice together this Christmas – mourn and remember those taken from us, too soon, too horribly. But we can rejoice in the expectation and hope of a better life after this one. A thrill of hope. 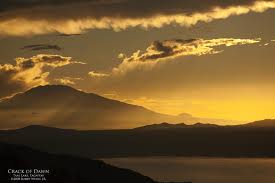 Wishing you peace and love at Christmas, and always.

Today I met my friend Lori at a restaurant called Luigi’s – actually, we ate in the deli area, where you order at the counter.  Luigi’s is just one of many, many  Italian restaurants in Rhode Island, and Johnston certainly has its share.  The restaurant is situated on Atwood Avenue (State Route 5), where Hartford Avenue (US Route 6) intersects, and is next to the Johnston Town Hall – a busy, very congested area that exemplifies urban sprawl.

So when Lori and I finished lunch and said our goodbyes, the easiest way for me to get home would have been to take either Hartford or Atwood to the Route 295 onramp and get on the highway (about a 15-20 minute drive home).  But I hate driving on the highway! Maybe it reminds me too much of going to my former job, or maybe I just hate to have to “keep up” with the RI drivers who think a 55 MPH speed limit sign really means 75 MPH.  Instead, I took the long way home – the other way.  Heading out of Johnston and into western Cranston, I drove on Scituate Avenue, past Confreda’s. The Confreda family has farmed in Rhode Island since 1922, and holds its traditions dearly, trying to preserve the “family farm feeling” and give their customers quality, locally-grown produce.  There are still farms on Scituate Avenue, although the McMansions seem to encroach more and more each time I come back.

From Scituate Avenue, I turned left onto scenic Seven Mile Road, with the big meadow and row upon row of day lilies on the right, the lovingly-restored White Rail Farm, past Henry’s Tree Farm, where families will begin arriving in early October to tag this year’s Christmas tree, into the village of Fiskeville, with the little cemetery next to the Tabernacle Baptist Church (“Bell ringing for worship at 9:25”).  This part of town is old and somewhat run-down, with some yards well-kept and others gone to seed.

From Fiskeville, I drove parallel to the Pawtuxet River, past the old Harris Mill and into the village of Phenix. At Phenix Square, I stopped at the red light and looked at the tiny brown house on the corner – what is now William’s Barber Stylist used to be the Earl R. Handy Insurance Agency, the business my grandfather built after he left the Centreville Bank.  This area, just a couple of miles from our home, was the place where my mother grew up, and I think of her often when I travel these roads.  This way home provided me with more comforting memories than any highway ever could.