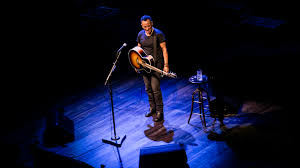 I’ve mentioned to a few people that it’s worth subscribing to Netflix just to watch “Springsteen on Broadway,” his almost one-man-show that ran at the Walter Kerr Theatre from October 2017 until a couple of weeks ago. On the day it ended, December 15, Netflix picked it up. And either before or after you watch this program, read Michael Hainey’s article about Springsteen in Esquire magazine. Even if you think you know Springsteen.

As a songwriter, he’s on par with Bob Dylan. As a performer, I’m not sure there’s anyone better alive today. Springsteen’s fans will recount their attendance at his legendary concerts.

He’s 69 now (and before you catch your breath on that, remember, as I did, that we’re all older) and he stands before you, the longtime fan, the new fan, the casual observer, and talks about his life. About his hometown, Freehold, New Jersey, the place he couldn’t wait to leave. About his parents, especially his father, who viewed the quiet, sensitive boy as a sissy. About the father-son relationship (“he was my hero, and my greatest foe”). Spoiler alert: it turns out okay in the end, and it should make you cry a little.

His first breakdown occurred when he was thirty-two, years after he’d already enjoyed tremendous success (six million copies of Born to Run sold in the U.S.). It was hard to explain. He says, “All I do know is as we age, the weight of our unsorted baggage becomes heavier . . . much heavier. With each passing year, the price of our refusal to do that sorting rises higher and higher. . . .”

As a society, we’re talking more about mental illness these days (thankfully), and Springsteen’s candor must be helpful. As Hainey writes, “Springsteen’s desire to share his demons, and to argue for the need he believes all of us have to confront our own—this is one of the show’s great powers. We ignore our demons, he says, at our peril. . . . This is the work of a man revealing his flaws so that he can inspire us to redeem ourselves.”

Hainey and Springsteen discuss pieces of lyrics (brilliant lyrics) that are so much a part of Springsteen (about the line ‘the lies that leave you nothing but lost and brokenhearted,’ Springsteen says, “Everybody carries those things with them. It’s a line that always penetrates. It still penetrates for me when I sing it each night.”)

And finally, those two lines from “Born to Run,” – “Together, Wendy, we can live with the sadness/I’ll love you with all the madness in my soul”

He was only 24 when he wrote those words, years before he had his first breakdown. And they’re possibly the most self-describing lyrics he’s ever written.

Go watch “Springsteen on Broadway.” And let me know what you think.

For many, this truly is the most wonderful time of the year. Some folks find joy in the frenzy of the season. But for others, there’s the exhaustion, the feeling of overwhelm at trying to do it all, in a limited amount of time. Clean, decorate, shop, wrap, bake, toast, mail, smile…. No wonder you’re stressed out.

And for many people, this is a sad time of year. Maybe it’s due to loss – of loved ones, pets, friends. Financial worries. Not enough sunlight (yes, it’s a thing). The loss of meaning in an ever-increasing material world. Or perhaps it’s something harder to pinpoint but can only be described as an all-encompassing feeling of melancholy. We’re living through harsh times, let’s face it. All of this can make you wish you had a river you could skate away on.

Social media is peppered with photos of smiling faces and sparkling trees. Of course it is, no one ever wants to share a photo of themselves feeling blue. And there’s nothing wrong with feeling festive! Celebrate! But if you have a friend or co-worker who opts out of the festivities, just accept it. Let it pass. Because for those who struggle through this time of year, all they wish for is to muddle through, somehow.

When I was in my late teens, a girl I’d known in high school committed suicide. We weren’t close, but it shook me. From what I understood later on, she was distraught over a failed love affair. I think my dad took it harder, especially as the father of three girls (and me in the middle always going through some sort of crisis). She saw no other way, and had no hope that tomorrow could be better.

In college, my best friend learned of a relative’s suicide via telephone. We were on our way to a friend’s house for a weekend of fun with others. I told him I’d stay back with him if he felt it too difficult to attend the party, but we went. When I look at photographs from that weekend, I see a forced smile, eyes full of pain and sadness.

And yesterday I learned of another young person who took his life. I didn’t know him, but I do know one of the people affected by the tragedy of despair. She is left reeling and broken.

I used to consider suicide a hostile act. I don’t anymore. My heart hurts for the person so consumed and overwhelmed by despair that there’s no room left for hope. The permanent solution to a temporary problem.

This past Friday, I attended the funeral service for a 58-year-old man who had lived with a brain tumor for ten years. And now I know yet another widow who will not have the chance to grow old with her best friend.

We may have more snow on Wednesday. As if this winter hasn’t beaten us down enough. March will not slip into spring, not without one last roar, apparently. Cities and towns have run out of salt, have depleted their snow budgets long ago. We’re going broke paying for heat. Our roads are falling apart. School may last until July at this point, with so many cancelled days. I’ve ingested too many carbs this winter, trying to find comfort in a bowl of macaroni and cheese.

Depression is all around. Whether it’s because of aging, menopause, winter, unemployment, lost love, or the feeling that time is slipping through our fingers, it can be a struggle to get up each morning and just live. I get it. I see it in my friends, I listen to it. People I love are suffering.

The snow will melt. It will feed the rivers. Life will burst forth – not yet, but soon. New life means hope. Hope brings light to darkness. It covers cold with warmth. It vanquishes dread and despair. Hope is joy. Joy is laughter. Life is beautiful.

If you celebrate Christmas, I wish you all the blessings this day holds.

If you don’t, I wish you peace and contentment.

And if you struggle with this time, as so many do, I wish you quiet moments. There is light in the darkness.