Maurice Utrillo (1883-1955) was a French painter who specialized in cityscapes. He was the son of artist Suzanne Valadon and an unknown father (although Spanish painter Miguel Utrillo y Molins claimed paternity in 1891 and offered the young boy his name).

Shy and withdrawn, Utrillo painted very few portraits. He usually portrayed—often using picture postcards as sources—the deteriorating houses and streets of Montmartre, its old windmills, and its cafés and places of amusement. He was also inspired by trips to Brittany and Corsica.

At 21, Maurice was plagued by mental illness, and his mother encouraged him to paint. Self-taught, he painted what he saw in and around his home in Montmartre. By 1920, he was internationally acclaimed.

Born in New York in 1893 to a French father and a Polish mother, Florence’s mother died when the little girl was 2, and her father died when she was only 15. She went to live with acquaintances, first in Rome, then in Berlin, and in 1924, at age 31, she moved to Paris. Trained as a painter, by 1928 she had abandoned painting in favor of becoming a free-lance photographer. Many of her photographs incorporate mirrors.

Up to the start of World War II, Henri established herself as a skilled photographer with her own photographic studio in Paris. When the city was occupied by the Nazis, her photographic work declined. The photographic materials needed were difficult to obtain, and Henri’s photographic style was forbidden under the Nazi occupation. She turned back to painting. With only a few later exceptions, the peak of her unique photographic experiments and professional photographic work was in the period from 1927 to 1930.

“What I want above all,” Henri said near the end of her long life, “is to compose the photograph as I do with painting. Volumes, lines, shadows and light have to obey my will and say what I want them to say. This happens under the strict control of composition, since I do not pretend to explain the world nor to explain my thoughts.”

László Moholy-Nagy, a contemporary, said: “With Florence Henri’s photos, photographic practice enters a new phase – the scope of which would have been unimaginable before today. Above and beyond the precise and exact documentary composition of these highly-defined photos, research into the effects of light is tackled not only through abstract photograms, but also in photos of real-life subjects.”

A French art dealer who lived from 1891 to 1934, Paul Guillaume was at the forefront of exhibiting African art, as well as promoting new artists such as Henri Matisse and Pablo Picasso. By the time he died at age 42, he had amassed an extensive collection of works by some of the leading modernists.

A master at re-invention (he was born into a modest family but by the age of 25 was a celebrity in the art world), writer John Richardson details the art scandal surrounding Guillaume’s death, his widow’s possible involvement, her subsequent remarriage, blackmail, forgery, entrapment, and all kinds of juicy stuff in this Vanity Fair article from 2012.

Born in Paris in 1885, Robert-Victor-Felix Delaunay was a French artist who co-founded the Orphism art movement, known for its use of strong colors and geometric shapes. This movement was perceived as key in the transition from Cubism to Abstract Art.

At 17, Delaunay indicated an interest in painting, and was sent by his uncle to study ‘decorative arts.’ Two years later, he struck out on his own and focused entirely on painting. 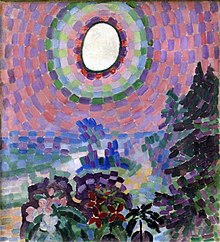 Delaunay and his wife lived in Spain and Portugal until after the end of World War I, when they returned to Paris. He continued to work in a mostly abstract style, but during the 1937 World Fair in Paris, Delaunay participated in the design of the railway and air travel pavilions. When World War II began, the Delaunays moved to the Auvergne, a rural region in central France, in an effort to avoid the invading German forces. Suffering from cancer, Delaunay’s health deteriorated, and he died in 1941 at the age of 56.

As you may know, the Blogging from A to Z Challenge begins on April 1, and runs each day (except Sundays) through the month. This will be my 5th year participating! If you’re wondering about my previous themes, I wrote about Poets, Novelists, Essayists, and Lyricists in 2012; Oh! The Places I’ve Been in 2013, Smile and Say…(yes, cheese!) in 2014, and last year I posted an A to Z of musical instruments.

This year’s theme is entitled PARIS BETWEEN THE WARS, and was inspired by a book I found at the Innisfree Bookshop in Meredith, New Hampshire. I love Paris, and I love this time period, from 1919 at the end of World War I, to 1939, just before the start of World War II. According to the book, during this time, ‘Paris underwent a creative fever that brought artists and intellectuals from around the world to the City of Light. The bohemian charms of Montparnasse attracted artists such as Picasso, Chagall, and Giacometti, while a vibrant café culture provided a forum for disputes between Dadaists and Surrealists and gave rise to a group of expa­triate writers. The creative energy was all-encompassing, establishing Paris as the epicenter of new trends in the arts, a position it would occupy until World War II.’

I will showcase some of the people who contributed to the richness of culture in Paris at this time, and I hope you’ll follow along!