Leave a comment on this blog post and you’re eligible to win this author’s giveaway. Each day in November that you comment gives you an entry into the Grand Prize drawing at the end of the month. (Print copies for US residents only, please. If you live outside the US and win, you’ll receive a digital copy of the book.) 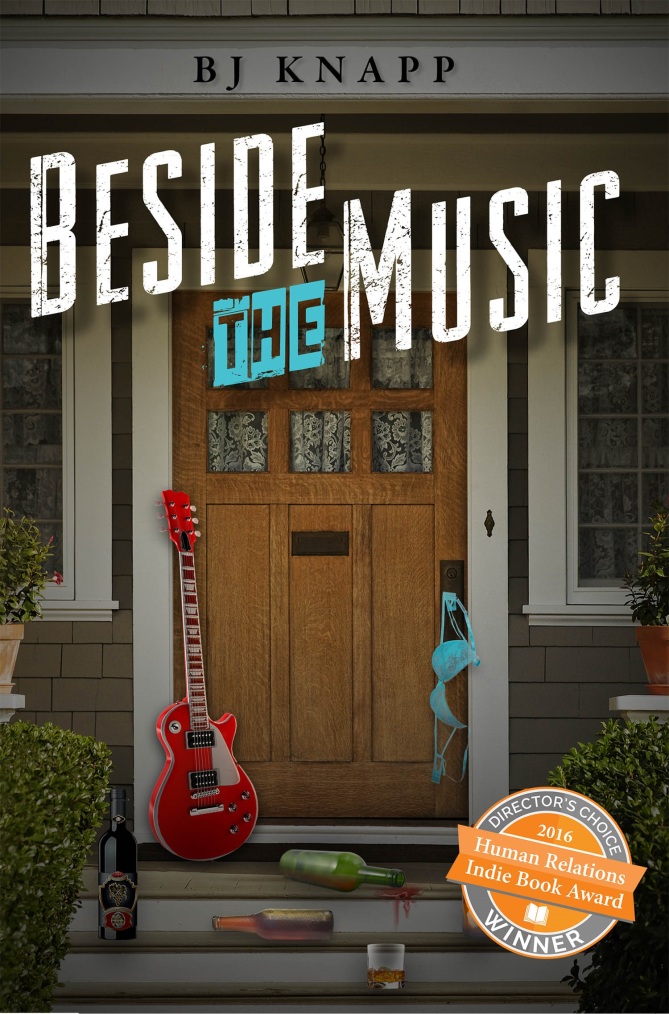 What Happens to a Marriage when an 80s Metal Band Moves In?

My name is BJ Knapp, and I am the author of Beside the Music.

What would happen to your life and marriage if an 80s metal band like Def Leppard moved into your house? Seriously, take a sec, look around your house and imagine where you’d stash four rockers, their management, and crew. Now imagine all the other things that come with a has-been 80s metal band—the other kinds of baggage. The “Do you know who I am?” attitude that formerly famous people try to pull, and the temper tantrum that ensues when people no longer know who they are. This is what happens in Beside the Music. Brenda and Tim have no idea what they’re in for when 80s sensation Hydra moves into their house while the band records their comeback album.

Brenda thought it would be great. She thought she’d be sitting at her kitchen table with Hydra as they pull all-night lyric writing sessions. She thought she’d sit on an amp in the studio and get to hear all the new songs before anyone else.

But it ends up not being anything like that at all. She hates to admit it, but having Hydra live with her and Tim is a total nightmare. Tim’s running for office, she’s gunning for the big promotion at work, and her snooty meddling mother-in-law shows up at the worst possible moments to hassle her. Instead of getting to be the rock and roll muse, Hydra nearly destroys her career and marriage. Tim moves out to get away from Hydra’s chaos, and her boss is threatening to fire her if she can’t get her act together at work.

Brenda needs to decide what’s more important to her… rock and roll or her marriage? Is it possible to be one man’s wife and another man’s muse?

As a former college radio station DJ, BJ was inspired to write this book after asking herself “Whatever happened to all those 80s rock stars and one-hit wonders?” Her writing career has contributions to RI Fit Magazine. But her prouder achievements are her original angry chick rock songs, usually about bad boyfriends, accompanied by her out of tune guitar.

BJ resides in Rhode Island with her husband, Todd, and dogs Nemo and Potter. She is an avid sailor and scuba diver, and also enjoys pretty much any outdoor activity. She has also single-handedly orchestrated hundreds of failed attempts at cooking. Follow BJ’s blog here.

GIVEAWAY! My mom always told me never to arrive at someone else’s home empty handed.  Today as Martha’s guest, I am turning up with something to share at this party today.  If you comment on my post below, you could win a signed paperback copy with a personalized haiku written just for you.

Want to hear more about Beside the Music, and my upcoming novel Before the Music (a prequel told from Keith’s perspective)?  Follow me on social media here:

To purchase Beside the Music: http://bjknapp.com/writing

Hope to see you on Saturday, December 1 for the Rhode Island Author Expo!