Leave a comment on today’s post and you’re eligible to win this author’s giveaway. Each day in November that you comment gives you an entry into the Grand Prize giveaway at the end of the month! (Print copies for US residents only, please. If you live outside the US and win, you’ll receive a digital copy of the book.) 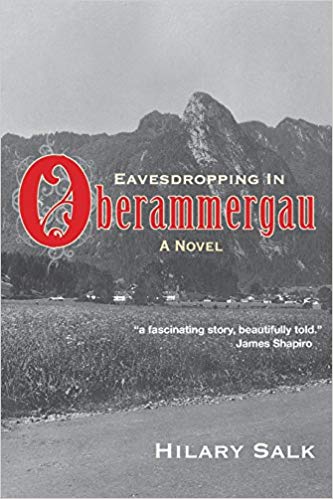 In 2020 the town of Oberammergau, Germany, will once again be the setting for its famous Passion Play, performed every ten years since 1634. Perhaps you are planning to experience the power of this dramatization of the last days of Jesus.

As in the 2010 production, you will likely see a somewhat different play from the traditional performances of the many decades since 1634.  As you read further in this post about the background of the Passion Play, you will discover the significant changes made as a result of the work done since the Holocaust to purge the anti-Semitism that has been part of its earlier pageantry.

I lived in the village from 1949 to 1952, the only child of a Jewish-American army officer, just as the villagers were taking on the roles of the Biblical figures. I was enchanted by the make-believe and taken to the play by my parents.

Fifty years later, I was confronted with the anti-Semitism inherent in the play and the recognition of the part this Bible story played in the mindset of the many who participated in the crimes of the Holocaust. I felt compelled to write of the truth I now faced, which evolved into my novel, Eavesdropping in Oberammergau.

To make the story accessible to young people as well as adults, I wrote in the voice of a young girl, similar to the girl I was in 1950. Unlike me, this girl learns by eavesdropping what has happened so recently in Germany and the part that the Biblical story has contributed to the hate for the Jewish people.

In the years I have worked on this novel, I learned from many survivors and historians of the Holocaust, from Catholic friends and writers who have been sensitive to the responsibility that the Church carries for the centuries of anti-Judaism, and from talking to and reading the work of rabbis and scholars.

I am aware that my slant on the story is painful for many, as it is to me. As the novel brings to life the history of the growth of Nazism, it seems essential to warn that even the most seemingly advanced civilizations can fall for demagoguery and hate.

Hilary Salk earned a BA and MAT in English from Brown University, and an MSW from Rhode Island College. She contributed to an early edition of Our Bodies, Ourselves, and has published a short story in The Jewish Women’s Literary Annual 2011. She is a founder of the RI Women’s Health Collective, ran for governor of Rhode Island in 1982, and served as a real estate broker at Salk Real Estate in Providence, Rhode Island, for 25 years.
You can request her book from your local bookstore and also find it at Amazon.
Hilary is giving away a copy of Eavesdropping in Oberammergau along with a bookmark. Just leave a comment on this blog to be eligible.
Hope to see you on Saturday, December 1 at the Rhode Island Author Expo!