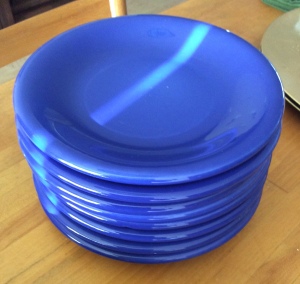 I’m adding to the donation boxes three white dinner plates (originally we had eight, but someone – not I – broke one, so we’re keeping four). Four bowls, four mugs. My service for eight will be halved. Eight blue stemmed water glasses, not used anymore.

The ‘good china’ that was Jim’s mother’s needs to go, too, but it’s his call as to when.

Meanwhile, Jim started on the garage without me! Well, he bought a new mountain bike and is motivated to have plenty of space for it.

And this week I kept track of plastic. It’s hard to see here, but I kept all plastic wrappings (produce bags, empty deli bags, one that held granola, etc.). They’re clean and will be deposited into the appropriate bin at Whole Foods. Progress! I hope you had a minimal week! Spring is here – finally!

One thought on “The Year of Living Minimally – Week Thirty-six”