Read an excerpt from Server:

Scott awoke to a headache that morning and to a feeling, which grew by the moment that the day promised disaster. This feeling crawled down his spine as he dressed and shone dull and limp through his parted blinds. Glancing out the window at the sky, part of which lay hidden inside dense fog, Scott wondered whether he should pass on his weekly trip about town. He shook his head in displeasure and closed the blinds. Entering the bathroom, he scrubbed his face with a washcloth and decided against taking a bath.

He grabbed his backpack, which was prepared the previous night as usual. The contents were fresh in his mind: one notebook, three pens, a copy of The Metamorphosis that was dutifully well worn and marked by dirt and sweat, and a half pack of cigarettes, one of which he lit as he closed the door behind him. Walking down the stairs took effort. His legs were stiff from sleep and long hours at the restaurant the previous day. A thought popped into his mind as he emerged from the entryway into the cool mist. I should have stayed in bed.

He shook his head, again and not for the last time that day, as he walked the down of the driveway and disappeared into the fog.

“Crossing guard. Check. Construction workers. check. Will they ever finish remodeling that bar?” he said out loud as he walked toward the bus stop.

Staring into the fog, he wondered if there were time to purchase cigarettes before the bus arrived. Will the bus be early?

He stepped from the curb, making his way toward the store. He watched for the 56 bus, but he knew his decision to be final. Entering the store, he took a place in line.

“What will I work on today?” He fingered the change in his pocket impatiently, struggling to grasp hold of a thought, which amounted to pulling a thread, the correct thread from a piece of cloth. The thought ran from him, laughing, laughing, and laughing.

“Can I help you, sir?” The clerk, a short fat woman with thinning hair, was forcing a smile at him through chubby red cheeks.

“Sorry.” He paid for the cigarettes and left the store.

He walked into the fog, which seemed to grow thicker by the moment. A smile rose upon his face when he noticed a lady waiting, huddled out of the mist under the bus stop. At that very moment, he heard the bus, which was not yet visible, coming loudly and quickly toward him. His legs moved as his lips formed into a circle.

“Damn.” He leaped from the curb into the street. The bus emerged from the fog, and for a moment, he ran parallel, losing ground each second, with his lungs protesting the sudden demand for oxygen. He looked up with confusion on his face and came to a halt right there in the middle of the street.

“Did I really see that?” Scott ignored the blaring of a car horn as a driver waited for him to move. “Did I see a monkey on the 56 bus?” 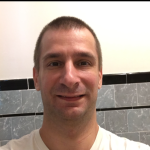 Stephen Moran is the author of Ella, The Terrorist of Providence Street, and Server. He owns and operates  Moran Press, a boutique publishing company dedicated to publishing Arthouse Paperbacks.  He worked for two decades in the service industry. Those years of experience are found in the pages of Server. Moran lives in Blackstone with his beautiful wife Maggie and daughters Kiana and Leila.
Meet over 100 local authors on Saturday, December 2! The Fifth Annual RI Authors Expo