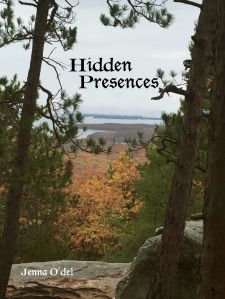 The story of Hidden Presences is like a forest that’s full of wild surprises, and Adamar the fox, one of the main characters, frequently encounters challenges, twists and turns, and questions such as, ‘how’d we get here?’

Adamar the fox must rescue his kit Miro, who was stolen by a vile king. As he takes on the quest of finding his kit, he discovers that the past cannot be left behind. Adamar realizes that like a forest, nothing in his world or his story is predictable. He faces unforeseen challenges in his attempt to rescue Miro, and as he navigates these challenges, he encounters numerous animal species. No humans are in Hidden Presences – the characters are all animals—mammals, birds, reptiles. Adamar is a red fox, while the two archers that accompany him are a coyote and a big brown bat. The characters are all anthropomorphic humanoids: they stand on two feet and speak like humans, though they use the attributes of their own species. They rely on their species’ sense of smell and hearing. But just as Hidden Presences is like a forest, it does not take place solely in a forest. Adamar and his companions visit towns along the way, on their quest to finding and rescuing little Miro.

Jenna O’del published her debut novel, Hidden Presences, in October 2015. Hidden Presences is the first novel in the anthropomorphic fantasy Hidden Strength Series. Weekly, she writes about the real-life versions of her characters in her Wildlife Wednesdays series, including a post about red foxes like Adamar and his family.

Hidden Presences is available through Amazon and Barnes & Noble. The second book in the Hidden Strength series was just published on November 15.