As you may know, the Blogging from A to Z Challenge begins on April 1, and runs each day (except Sundays) through the month. This will be my 5th year participating! If you’re wondering about my previous themes, I wrote about Poets, Novelists, Essayists, and Lyricists in 2012; Oh! The Places I’ve Been in 2013, Smile and Say…(yes, cheese!) in 2014, and last year I posted an A to Z of musical instruments. 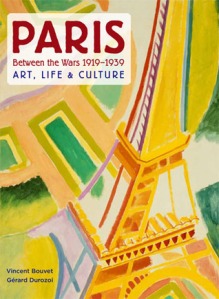 This year’s theme is entitled PARIS BETWEEN THE WARS, and was inspired by a book I found at the Innisfree Bookshop in Meredith, New Hampshire. I love Paris, and I love this time period, from 1919 at the end of World War I, to 1939, just before the start of World War II. According to the book, during this time, ‘Paris underwent a creative fever that brought artists and intellectuals from around the world to the City of Light. The bohemian charms of Montparnasse attracted artists such as Picasso, Chagall, and Giacometti, while a vibrant café culture provided a forum for disputes between Dadaists and Surrealists and gave rise to a group of expa­triate writers. The creative energy was all-encompassing, establishing Paris as the epicenter of new trends in the arts, a position it would occupy until World War II.’

I will showcase some of the people who contributed to the richness of culture in Paris at this time, and I hope you’ll follow along!

19 thoughts on “Blogging from A to Z – Theme Reveal”