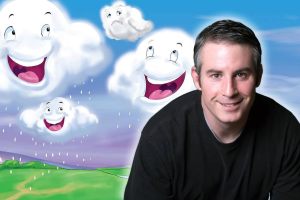 As a firm believer that a better tomorrow starts with a better today, and with the young people of today, Rhode Island author/radio personality Kevin Mulhern presents his children’s book, Cody the Cloud – a book with a strong message about anti-bullying, believing in oneself, and the power of friendship and love to literally transform the world.
Since its release by Mascot Books in January, 2015, Mulhern has been donating a portion of all proceeds of copies of CodytheCloud sold on his website to various charities.  Most recently, he was involved in a fundraising initiative to help raise over $10,000 in partnership with Kentucky Fried Chicken in Greenville, RI for a young Warwick, RI boy with Spinal Muscular Atrophy who needed a wheelchair ramp van.  Through Cody, Mulhern has also donated to Hasbro Children’s Hospital, Special Olympics RI, Meeting Street School, the Leukemia and Lymphoma Society, the San Miguel School, and The Run To Home Base Program for military veterans, among others.
A member of the Association of Rhode Island Authors, Mulhern has read Cody the Cloud – geared toward kids between three and eight years old – to nearly 50 local schools, libraries, bookstores, and other events. The book has been featured twice on the WJAR Channel 10 evening news, on The Rhode Show, and on numerous radio stations and in print publications. The story of Cody the Cloud was recently adapted into a play and performed by the Radioactive Theater Company at Symposium Books in East Greenwich, RI, where its anti-bullying message and messages about kindness and love were well-received by young and old alike in two performances of the play.
Currently, Mulhern is donating 30 percent of all proceeds from Cody books or Cody pillowcases sold on his website now through the end of the year to Hasbro Children’s Hospital to help kids and their families in the fight against cancer. Mulhern thanks all those who have supported the book and its various associated charities, and is happy to do local book readings free of charge if requested.
Contact Kevin through email at CodytheCloudBook@gmail.com, or through his website.