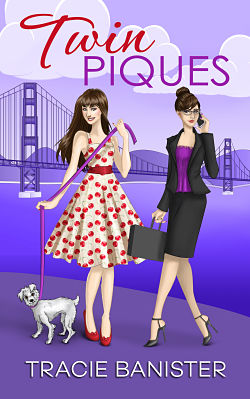 Tracie Banister is one of my favorite independent authors, and I’m thrilled to announce the release of her third novel, Twin Piques. Love the title! Here’s what the book is about:

Forensic accountant Sloane Tobin and kooky pet psychic Willa may have the same face, but that’s the only thing these identical twins have in common.

How she can read the hearts and minds of animals has always been a mystery to Willa, and her rotten luck with men is equally baffling. Although she’s been looking for “The One” for what feels like forever (a teenage marriage to a French mime and dating a guy named Spider seemed like good ideas at the time!), optimistic Willa refuses to give up on love. When she meets Brody, the handsome rose expert hired to save her grandmother’s garden, she’s instantly smitten, but why does he keep sending her mixed signals? Does he return her feelings, or is their attraction all in her fanciful head?

Unlike her twin, Sloane has zero interest in romance. Her passion is her job, where she uses her gift for numbers to take down slimy embezzlers and asset-hiding spouses. When she’s assigned two high profile cases, Sloane feels confident the promotion she’s been angling for is within her grasp. But will her plan to climb the corporate ladder be thwarted by difficult clients, her co-worker-with-benefits, or – most surprisingly of all – her own sister? And how’s she supposed to stay focused on the drama at work when her childhood friend, Gav, moves in next door and the spark between them becomes impossible to ignore?

To get what they both want, can Willa and Sloane band together and rely on each other’s strengths? Or will their differences drive them apart once and for all?

An avid reader and writer, Tracie Banister has been scribbling stories since she was a child, most of them featuring feisty heroines with complicated love lives like her favorite fictional protagonist Scarlett O’Hara. Her work was first seen on the stage of her elementary school, where her 4th grade class performed an original holiday play that she penned. (Like all good divas-in-the-making, she also starred in and tried to direct the production.)
Tracie’s dreams of authorial success were put on the back burner when she reached adulthood and discovered that she needed a “real” job in order to pay her bills. Her career as personal assistant to a local entrepreneur lasted for 12 years. When it ended, she decided to follow her bliss and dedicate herself to writing full-time. Twin Piques is her third Chick Lit release. The pet psychic character in this novel was inspired by Tracie’s rascally rescue dogs. She’d love to know what goes on in their heads!

You can grab a copy of Twin Piques here:

5 thoughts on “Twin Piques is Here!”