From now until the end of August, I’ll be featuring one of my favorite authors weekly on this blog. I’m hoping you might meet a new writer, and each week you’ll have the opportunity to win one of that author’s books (digital version). At the end of the seven weeks, everyone who has entered any or all of the giveaways will be entered to win the grand prize. But for now, let me introduce you to my friend Pauline. I read her book, Saving Saffron Sweeting, last year and fell in love with the story, the characters, and especially with the writing. Welcome, Pauline! 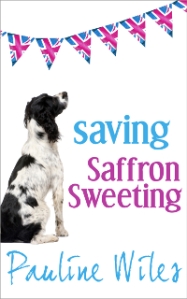 What inspired you to write this book?

PW:I’ve been fascinated for a while about how people’s actions after infidelity don’t always match what they assumed they would do. Most people (men and women) claim that if their partner cheats, the relationship is immediately over. But that’s not always the choice they make, when actually faced with an affair. I felt that was a theme worth exploring.

Secondly, I love living in California but miss England too. I wanted to set my novel there so I could write about all those fun British quirks (and baking) which make the country distinctive.

Do you have a specific writing style?

PW:  My readers would probably mention my on-paper British accent and the characters’ tendencies to reduce the pain of their problems with comfort food. I write in the first person and definitely emphasize England’s strong points. And I’m learning to trust that my readers will appreciate my sense of humor, and recognize irony when they see it.

What books have most influenced your life most?

PW: As a child, I read almost everything written by Enid Blyton. Looking back, much of it was cheesy and predictable but at the very least, she instilled passable grammar in me. My favorite book is Pride and Prejudice, although I hesitate to claim an influence as Austen is so far out of my league, she might as well be writing in a different language. And Saving Saffron Sweeting owes at least a nod to Nevil Shute’s A Town Like Alice: the ability of one person to be the catalyst which transforms a community made a big impression on me.

What book are you reading now?

PW: I’m listening to the audio book of Emily Giffin’s The One & Only. Considering I know absolutely nothing about the world of (American) football, I’m impressed at how she’s managing to keep my attention. I’m pretty sure I spotted early on the chaos the main character was going to bring on herself, but I think that guessing where a story is heading isn’t necessarily a bad thing.

***************
About Pauline: British by birth, Pauline Wiles moved to the San Francisco Bay Area nine years ago and, apart from a yearning for afternoon tea and historic homes, has never looked back. Her writing has been published by House of Fifty, Open Exchange and Alfie Dog Fiction. Her début novel, Saving Saffron Sweeting, reached the quarter-final of the Amazon Breakthrough Novel Award and was a number one Kindle Best Seller.

When not writing, she can be found getting the steps wrong in a Zumba class or calculating how many miles she has to run to justify an extra piece of cake. Her ambition is to sell enough books to cover the cost of flying herself and a reader to London for tea.

About Saving Saffron Sweeting: Grace Palmer’s British friends all think she’s living the American Dream. But her design business is floundering and when she discovers her husband is cheating with her best client, she panics and flees home to England.
The tranquil village of Saffron Sweeting appears to be a good place for Grace to lick her wounds, but the community is battling its own changes. Reluctantly, Grace finds herself helping her new neighbours as they struggle to adjust and save their businesses. However, not everyone has the same opinion on what’s good for the village. The charismatic new man in her life may have one speculative eye on Grace, but the other is firmly on profit. How will she navigate the tricky path between her home and her happiness?

So……to enter this giveaway, just click on the link below (“a Rafflecopter giveaway”). Three easy steps and you’re entered. And be sure to check back next week!