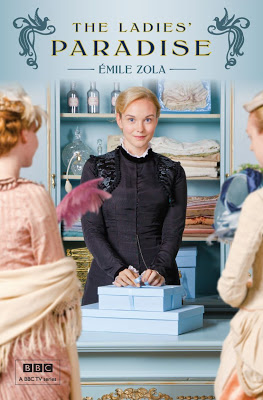 Well, what did you think? If you didn’t have a chance to catch the two-hour premiere episode of “The Paradise,” read a recap of the first hour from Elizabeth Marx (scroll down to her link). I’m going to tell you what happened during the second hour last night…

Our Denise may be the new girl on the job, but she manages to impress both Miss Audrey (her boss) and Moray (the store’s owner) with her creativity and marketing acumen. Denise suggests to Moray that he hold a “Miss Paradise Pink” contest for the women shoppers, with a prize and some publicity for the woman deemed prettiest. Realizing that her ambition is not seen with favor by some of her co-workers (isn’t that always the way?), she asks Moray not to let on to Miss Audrey that it was her idea. Of course, Miss Audrey has virtually no creative spirit, and when she proposes the idea to her staff, it’s apparent that Denise is the only person who has any sense about selling a campaign.

Meanwhile, Katherine Glendenning, Moray’s “intended” and the daughter of Lord Glendenning, a wealthy banker, wants to be engaged in the worst way, to the extent that she offers her dead mother’s engagement ring to Moray one evening at dinner, in the hopes that he’ll use it to propose to her. Very sad. Rich women shouldn’t be so desperate. Katherine’s friend Jocelin visits and they go to The Paradise, where Jocelin chooses to buy just about everything she sees (lace gloves! oh, and deerskin gloves, too! three hats!). Yep, Jocelin must be depressed about something, because she’s buying and buying and there’s no talk of actually paying for these items. Moray introduces the idea of extending credit – ah! Every woman’s dream: buy now, pay  sometime. Jocelin’s pretty but married head is turned by the young sales associate, Sam, who is quite the charmer (the mark of a really good sales associate). When she has a breakdown in the store and doesn’t want to make a scene, he conveniently snaps the heel of her boot so she can pretend to have turned her ankle and be taken home. Later, we learn that she’s left her husband (a railroad tycoon), but the Glendennings don’t know (scandalous, right? And what’s a woman to do all on her own, anyway?). Jocelin summons Sam to the home, plies him with wine and tries to kiss him. And, of course, Sir Glendenning and Katherine walk in on the scene, which looks very bad for Sam, because he is, only a store employee and not part of the wealthy class.

Father and daughter Glendenning want poor Sam sacked (“the draper will be dismissed, the matter will be forgotten”), but here is where the otherwise slippery Moray shows some redeeming value, telling Sam, “Your word means as much to me as any member of the gentry.” He refuses to fire Sam, instead moving him to the back of the store until he can find out the truth. And once Denise provides Moray with evidence, which is confirmed by Lord Glendenning, Sam is brought back to the front of the store. He tells Denise, “I fussed over her [Jocelin] because she was a customer. That was my job.”

There is some wonderful dialogue in this show, especially as it pertains to the “upstairs/downstairs” relationship between the classes. Katherine tells Moray that he defended “the draper because he’s one of your own.” Moray counters that Katherine couldn’t possibly believe Jocelin was wrong “because of her refinement.” And poor Jocelin wails to Katherine that her husband Teddy “doesn’t know I exist! I want to kiss and be kissed back! What is wrong with that?! I married the wrong man!” Of course, back then, marrying the wrong man was a problem. Unless, of course, the wrong man died.

Perhaps my favorite line of the episode belonged to Lord Glendenning: “In the end, women make errand boys of us all.”

For more recaps of future shows, see the schedule below. And don’t forget to enter the ParadiseParty contest! In case you missed it, HERE are the details.

10 thoughts on “The Paradise! A Recap”