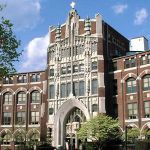 Written last year and re-posted in memory of the ten young women who died as a result of a tragic fire at Providence College, 35 years ago.

We had our Christmas party that night, and there was wine.  Plenty of wine and nowhere to go except down the hall, around the corner, and back to the room I shared with Wilma.  We did a Secret Santa that year.  I can’t remember who I picked, or who picked me, or what gift I gave, or what I received.  Our floor, McVinney 4th, didn’t participate in the decorating contest; no one volunteered to organize it.  Besides, the girls in Aquinas usually won anyway.

It snowed that night, and some of the girls walked to the quad, to join in throwing snow at boys they liked.  Wilma and I stayed inside, talking about musical theatre with Eileen and Rosemary.

I was sleeping soundly.  Wilma woke up first to the pounding on the door.

“Is there anyone else in this room besides you two?”  It was our Resident Assistant, a senior named Kathy.

“No,” Wilma mumbled, thinking that Kathy was asking if we had boys in the room.  We weren’t supposed to let boys stay over.  Parietals, they called it.  No boys allowed.  But Kathy wasn’t looking for boys.  She was looking for the girls.

The telephone rang.  It was my sister Ann, a senior living in Meagher Hall.  There were only three girls’ dorms: Aquinas, McVinney and Meagher.  I lived in Aquinas freshman year.  Aquinas 228, with Judy and Brenda.  Aquinas 2nd South.

The 4th floor North of Aquinas did a magnificent job with decorations.  Even a manger scene illuminated by a gooseneck desk lamp.  Paper over everything.

Ann called Mom and Dad to let them know. To tell them we were okay.  That there would be news on television.

Wilma and I dressed quickly.  No time to think, just pull clothes on.  We filed out of McVinney with the other girls and walked to the cafeteria in Raymond Hall.  Wilma said “Don’t look,” but I looked.

We tried to remember which of our friends lived up there. Debbie.  Katy, Ellen, Mary Alice.  Kim, Terry, Robin.  Girls we’d see in class, in the Rathskellar, girls we’d drink beers with.  I saw Kim and Terry; they were looking for someone. “We think Katy’s at the hospital.” Katy’s boyfriend Jeff had a look in his eyes I’d never seen before.

Dad drove up from Warwick and brought Ann and me home.  I learned the names, and didn’t think I’d ever forget them.  Ever.  But except for Katy and Debbie, I had to look them up when I was writing this piece, and for that, I’m sorry.