I am the lucky one, because I call Cynthia Cooper a friend.  You may not know her, until I give you a little more information.  Cynthia and the team of auditors she led discovered and unraveled a massive fraud at telecom giant WorldCom, to date the largest corporate fraud in history.  She was one of three women featured on the cover of Time magazine – all three named as Persons of the Year in 2002.  It’s coming back to you now, isn’t it? 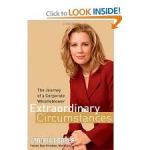 Cynthia wrote a book about her experiences – it’s called “Extraordinary Circumstances,” and I recommend it.  Don’t let the word “audit” frighten you; I know, I know, and it’s okay.  We write words.  We’re not really numbers people.  You don’t even have to understand the whole audit practice.  It’s Cynthia’s recounting of her journey that is the story, and I believe you’ll be moved by it.

Because Cynthia Cooper did the right thing, when doing the right thing was risky and dangerous, when it impacted not only herself but her family, her neighbors, her community.  A lot of people lost their jobs after the fraud was revealed.  Cynthia was threatened, ridiculed, and doubted.

In the epilogue of “Extraordinary Circumstances,” Cynthia wrote that “…this story is about human nature, about people and choices.”

Each one of us is faced with an ethical dilemma daily, in varying proportions, of course.  It doesn’t matter whether you’re at school, at work, with your friends, family, strangers.  You may be pressured into doing something you know isn’t right.  You may worry that not doing it will cost you your job.  As part of her book’s epilogue, Cynthia created “10 Steps to Sorting Through Tough Decisions and Making the Right Choices.”

3 thoughts on “C is for Cynthia Cooper”